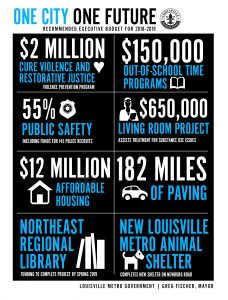 Mayor Greg Fischer proposed a 2018-2019 city budget that builds on the city’s momentum and commitment to public safety and growing jobs, despite the significant challenges of rising insurance costs and a $9.4 million bump in pension expense.

This $623 million general fund budget — with the theme “One City, One Future”— anticipates $26 million in new revenue, with 55 percent earmarked for public safety: LMPD, the Office for Safe and Healthy Neighborhoods, the Louisville Fire Department, Corrections, Emergency Services, the Criminal Justice Commission and Youth Detention Services.

“Public safety is our No. 1 priority, as evidenced by this budget and the ones before it,” the Mayor said about his eighth budget presentation, adding that the investments, and the strategy that accompanies them, is returning tangible results.

“In 2017, we saw our numbers on crime overall and violent crime in particular start to decline,” he said. “And while there’s lots of work ahead, I’m glad to say that this positive trend is continuing in 2018.”

The budget also includes investments in affordable housing, paving and workforce development, and funding to complete the Northeast Regional Library. When it opens in 2019, 90 percent of city residents will live within five miles of a full-service library.

In his remarks, the Mayor acknowledged budget challenges, including the serious impact of the state’s pension crisis and a $9.6 million employer health care cost increase. Though the budget avoids layoffs, he said, 49 positions will be eliminated through attrition. “We’ve worked to implement cuts and reductions in a way that‘s fair and minimizes the impact on city services,” the Mayor said.

The Mayor opened his presentation by highlighting Louisville’s economic momentum, evidenced by more than 72,000 new private sector jobs, 2,500 new businesses and nearly $13 billion in capital investment happening throughout the city since 2014, including a record investment of $800 million in west Louisville.

(Read the Recommended Executive Budget for 2018-19)

That progress, along with the revenue growth and smart financial planning, “allows us to continue to invest in ourselves and in key development opportunities,” he said, ranging from the Russell neighborhood transformation, including the planned Track on Ali, as well the Soccer Stadium District in Butchertown and redevelopment of Colonial Gardens in south Louisville.

The budget maintains a high level of local dollars — $22.5 million — in paving roads, fixing sidewalks and creating bike lanes in the city, which reflects a commitment to the “fix it first” strategy of Move Louisville. And it provides funding to relocate LMPD headquarters, as well as the city’s vehicle impound lot.

In accordance with the city’s recently released plan to address the impact of substance use disorder, the budget increases funding to the Living Room Project, a partnership with Centerstone that helps people struggling with opioids or other substance use get treatment and mental health support instead of going to jail or the emergency room.

“We also have to continue supporting efforts to make sure citizens can meet basic needs, like housing,” the Mayor said, noting that in last three years, the city has invested nearly $30 million in the Affordable Housing Trust Fund and Louisville Cares, and is continuing that commitment this year by investing another $12 million in affordable housing.

Mayor Fischer cautioned that while he remains optimistic about Louisville’s future, the state pension crisis “will be a drag on our budget for the foreseeable future” without accelerated revenue growth.

“Our economic momentum and our readiness for the future require more substantive and comprehensive revenue-producing tax reform,” he said, stressing that reform must include more local control, so that Louisville’s citizens and leaders can craft and implement strategies that work for the city.

“It would be easy in a challenging budget cycle like this to just focus on the needs of the moment. And certainly we have to address the concerns and opportunities facing our citizens today,” the Mayor said. “At the same time, we have to also keep an eye to the future. That’s been our approach from Day One, and it’s helped us work with our partners across the city to create a growing economy with tremendous potential for our city.”