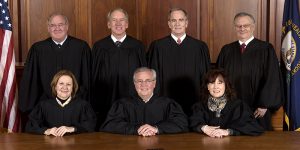 The Supreme Court of Kentucky will convene April 18-19 in Frankfort to hear oral arguments in cases that originated in Fayette, Jefferson and Oldham counties. Proceedings are open to the public and will take place in the Supreme Court Courtroom on the second floor of the state Capitol at 700 Capitol Ave. in Frankfort.

The public may also observe oral arguments via the Supreme Court live stream on the Kentucky Court of Justice website. Oral arguments are available online as they occur in real time and are not available as archives.

The Supreme Court is the state court of last resort and the final interpreter of Kentucky law. Seven justices sit on the Supreme Court and all seven justices rule on appeals that come before the court. The justices are elected from seven appellate districts and serve eight-year terms. A chief justice, chosen for a four-year term by fellow justices, is the administrative head of the state’s court system and is responsible for its operation. The Supreme Court may order a ruling or opinion to be published, which means that the ruling becomes the case law governing all similar cases in the future in Kentucky.

“Environmental Law. Stigma Damages to Property. The issue is whether and to what extent a property owner may be entitled to additional damages beyond costs of remediation for stigma attaching to property as a result of an environmental injury.”