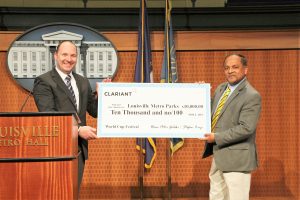 Louisville Parks and Recreation is hosting a three-day family-friendly street festival and viewing party during the semifinals and finals of the World Cup soccer tournament on July 10-11 and July 15 in front of Metro Hall.

Clariant is a globally leading specialty chemicals company, based in Muttenz near Basel, Switzerland. Its North American headquarters are in Charlotte, North Carolina. Clariant employs several hundred people in Louisville, and last fall announced a partnership with Jefferson County Public Schools to provide funding for a STEM camp at the California Community Center.

“We are very appreciative of Clariant’s contributions to our city. They have been active, engaged corporate partners that show concern for Louisville and want to make the city a better place,” said Seve Ghose, Director of Parks and Recreation.

Louisville Parks and Recreation has secured a 17’ x 10’ HD screen to show the games in July in partnership with the local Fox affiliate, WDRB. Other sponsors include Al Dia newspaper, Aztec Flooring and WFPL Public Radio.

While the games are on, attendees will be able to enjoy fare from food trucks and vendors within the Fan Zone; a small-sided soccer field set up for youth games; a radar gun to gauge ball speeds, a juggling competition. As the event is meant to be family-friendly, no alcohol will be available at the event.