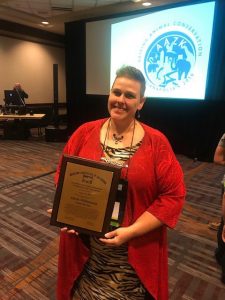 Louisville Zoo Keeper Alexis Williamson has been awarded the Lutz Ruhe Professional of the Year Award by the American Association of Zoo Keepers (AAZK).  Williamson, who works in Gorilla Forest, was honored at the association’s national conference on Tuesday, Aug. 20 in Indianapolis.

The Lutz Ruhe Professional of the Year award recognizes outstanding commitment to professionalism. Williamson’s conservation efforts were specifically noted which include contributions to Plinko for a Porpoise and the Zoo’s flagship Black-Footed Ferret Conservation Center as well as generational record contributions for the gorillas housed at the Louisville Zoo. In addition, she has been a vital part of the formation of the Animal Enrichment Tree Program at the Zoo while serving on the enrichment committee. Williamson has been president of the AAZK chapter at the Zoo for 14 years.