Watch For The Flags At Kentucky, Barkley Lakes 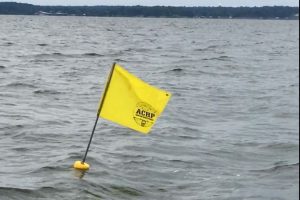 Commercial anglers on Kentucky and Barkley lakes are deploying indicator flags to mark the locations of their nets.

“We want to make anglers and recreational boaters aware of ongoing commercial angling and net locations,” said Jessica Morris, fisheries biologist with the Kentucky Department of Fish and Wildlife Resources.

“These bright yellow flags are visible for a mile. While nets are generally set 3-feet underneath the surface, boaters still should not go between flags or use them for skiing buoys because of the risk of entanglement.”

The Kentucky Fish and Wildlife Foundation purchased about 100 flags and the materials to attach them to the nets.

This spring, the Kentucky Fish and Wildlife Commission voted to allow commercial netting during summer weekends as part of the ongoing effort to control numbers of invasive Asian carp in Kentucky and Barkley lakes. Commercial anglers previously were restricted to netting during the weekdays in summer.

Asian carp outcompete native fish for food. Silver carp, one of the Asian carp species, can be hazardous to boaters as they jump out of the water as a boat approaches.

The net indicator flags are part of a collaborative effort between the department and Kentucky Fish and Wildlife Foundation to avoid user conflicts on the lakes. Nets may be deployed day or night, and not all will be marked.

So far this year, commercial anglers have netted 2.8 million pounds of Asian carp from Kentucky waterways, more than double the 1.1 million pounds taken by the same time in 2018. Morris said approximately 80 percent of the harvest comes from Lake Barkley.

Kentucky Fish and Wildlife is working with commercial anglers and processors to develop markets for Asian carp.

As part of the effort to control Asian carp, construction is underway on a deterrent system designed to thwart the fish from entering a boating lock chamber into Lake Barkley. The device, known as a bio-acoustic fish fence, could be operational by fall.