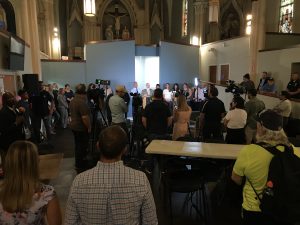 Mayor Greg Fischer joined with Metro Council members and community outreach representatives yesterday to announce the initiatives that will receive Louisville Metro Government funding to continue addressing the needs of homeless individuals and families in the city.

Building on work started early in 2019 when the city allocated $500,000 for programs, the plan provides $1 million from the city’s FY20 operating budget toward initiatives chosen in collaboration with the Coalition for the Homeless to align with the eight recommendations outlined in the University of Louisville study, “Solving Street Homelessness in Louisville, Kentucky,” released in June.

“Louisville, like many American cities, has seen a rise in unsheltered homelessness in recent years and an increase in homeless encampments. We’ve made clear progress but there’s more work to do to ensure that every Louisvillian has a place to call home,” said Mayor Fischer said, adding that, “There is no one-size-fits-all solution. We have to help our homeless population deal with and overcome their challenges one person at a time. That’s what a compassionate city does.”

The newest round of funding is part of work begun in fall 2017 when Mayor Fischer created the Homeless Encampment Task Force, chaired by Eric Friedlander, director of the Office of Resilience and Community Services.

That team helped inform decisions made about the funding allocations in January, which resulted in these outcomes:

“We know that no one idea will address the multiple issues impacting people who are homeless, nor the complex needs of this diverse population,” said Friedlander. “That’s why I am so appreciative of the work, expertise and understanding of our partners, including organizations that are part of the coalition, and the street outreach groups that engage people where they are. Working together, we’ve shown we can make a difference.”

Metro Councilman Bill Hollander (District 9) said: “This funding builds on the work we started in January.  It provides shelter for men, women and families and also funds outreach workers who can help address the root causes of homelessness.  Even as Louisville Metro deals with a very difficult budget, we can’t ignore the needs of our neighbors experiencing homelessness.”

Councilwoman Barbara Sexton Smith (District 4) said:  “Our local government is focused on implementing common sense solutions for the complex challenges surrounding those experiencing homelessness. I have stated several times before, there is room for everyone to step up and help. In addition to the more than $1.5 million made available during this past year we still need more businesses, nonprofit organizations, healthcare, education and the interfaith communities to reimagine their roles and create common sense solutions that will produce real results for real people needing assistance because this is our reality.”

Friedlander added that the city also provides support to issues that directly affect homelessness, including $41 million invested in affordable housing over the past four years, implementing a plan to battle substance-use disorders, and directing $1.5 million in federal funding to local agencies such as the coalition, Volunteers of America, St. John Center and Wayside.

“The Coalition for the Homeless is so excited to see the city’s commitment to addressing the needs and best practices identified in the University of Louisville ‘Solving Street Homeless in Louisville, Kentucky’ Study,” said Natalie Harris, Executive Director of the Coalition for the Homeless.  “We know these important programs saved lives over the last six months and are excited to see them extended and improved.”

The U of L report, “Solving Street Homelessness in Louisville, Kentucky,” was the result of a five-month long assessment study that outlined the process of applying best practices to Louisville’s Continuum of Care (CoC), a process developed by the U.S. Department of Housing and Urban Development (HUD) that helps communities across America address the problems of homelessness in a coordinated, comprehensive and strategic way.