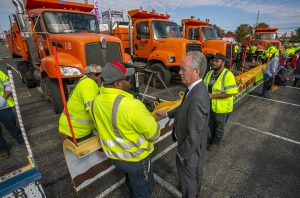 Joined by more than 250 members of the Louisville Metro Snow Team, Mayor Greg Fischer today declared that the city is battle ready for the 2019-20 snow season. After the announcement, the Snow Team worked through a mock snow event that included driving all road treatment routes.

“I’m honored to stand along with our Snow Team to declare Louisville is ready to tackle significant winter weather,” said the Mayor. “This team will jump into action any hour, any day, to make it safe for the rest of us to get where we need to go when it snows.”

The students – from Eisenhower, Gutermuth, Jacob, Layne, Sanders and Wilkerson elementary schools – decorated six snowplows to be used in the upcoming winter season. Some of the plows will be part of the Lots of Lights Parade during the Light Up Louisville celebration on Friday, Nov. 29. The plows were displayed during today’s event in the Cardinal Stadium parking lot.

JCPS Superintendent Marty Pollio said, “We appreciate the diligence and hard work of the Louisville Metro Snow Team in keeping roads safe and passable every winter. We depend on that commitment to ensure students and employees can get to and from school in inclement weather, limiting the number of days that students are away from the classroom.

“I’m also proud of our students who used their artistic talents to show their appreciation in their own way — Louisville’s streets will be both safer and more beautiful this year when the Snow Team is activated.”

The Snow Team is led by Metro Public Works under the leadership of Director Vanessa Burns and Assistant Director for Roads and Operations, Brian Funk. The Public Works Solid Waste Management Division, Metro Parks, the Department of Codes & Regulations, and the Division of Fleet and Facilities are also part of the team.

While the Louisville Metro Snow Team is focused on keeping things moving safely on the ground, Louisville Muhammad Ali International Airport has a team that’s focused on making sure people can get in and out of the city through the air.

“The dedicated snow teams for both Louisville Muhammad Ali International Airport and Bowman Field are prepared and ready to respond anytime inclement weather is in the area,” said Dan Mann, Executive Director of the Louisville Regional Airport Authority. “As SDF remains strong as the seventh busiest cargo airport in the world with more than 300 daily flights from our cargo partners, plus 80 flights from the passenger airlines, we play an essential role in connecting people and goods around the globe. It’s crucial that our airfield is operational and ready for use 24-hours-a-day, seven-days-a-week. Just as Louisville Metro takes great care of the city, we remain focused on ensuring the airport is ready for business at all hours of the day.”

Louisville will begin the snow season this year with 38,500 tons of salt on hand. Most of the salt will be stored underground in Louisville Mega Cavern, 1841 Taylor Ave. About 15,550 tons are distributed to four above ground locations where the salt will be loaded onto spreading vehicles as needed. Total salt used in the 2018-19 snow season was 10,505 tons.

The city will also continue to pretreat roads with brine ahead of snowfalls. Brine is a saltwater solution that reduces the adherence of snow and ice to pavement and reduces slick spots.

The city’s snow removal progress can be followed via an interactive online map. During snow events, a snow map will be posted on the city website, www.Louisvilleky.gov, and the Department of Public Works site at www.louisvilleky.gov/publicworks. The latest updates will also be posted on Twitter at LouPubWorks.