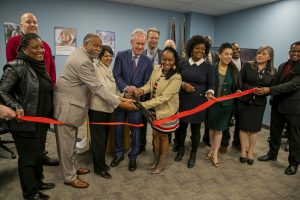 The Broadway office will house Census Bureau managers, staff, materials and equipment needed to support the 2020 Census efforts for 43 counties in central and western Kentucky, including Louisville. Census office employees will be conducting local Census operations to guarantee that a complete count of residents is reached in 2020.

“The Census helps determine government representation and the distribution of billions of dollars for local communities for highways, schools and hospitals,” Mayor Fischer said. “We need every person living in Louisville to be counted, and I’m thankful for our community partners on the Municipal Complete Count Committee who are working throughout the city for full representation.”

The official Census 2020 date is April 1 and households will begin receiving Census information in mid-March.

The Municipal Complete Count Committee (MC3) is comprised of Louisville Metro staff, community leaders, and faith organizations. The MC3 is working to raise awareness of the Census throughout the community, particularly with historically under-counted populations, children age 5 and younger, immigrants and young African-American men.

The new Census Office will house training and recruitment efforts. The Census must hire thousands of employees for part-time, temporary, work from home positions with pay up to $23.50 per hour plus mileage reimbursement. Apply online at: 2020census.gov/jobs. The application takes about 30 minutes and averages 30 to 60 days to hear back. Most of these are work from home field positions with paid training and a laptop provided.

Additional 2020 Census jobs are available at the U.S. Census Bureau’s National Processing Center, located across the river in Jeffersonville, Indiana. Job vacancies at this facility are posted on USAjobs.gov and include clerks, technicians, warehouse positions, office staff and supervisory staff.

“We need help filling thousands of jobs, and we are looking for people who want to be a part of history,” said Carolyn Franklin, Regional Census Partnership Specialist. “It is important that we get an accurate count in the Census because we supply population count data for the next 10 years. That data is used to fund school lunches, Head Start/Jump Start, emergency services, Medicaid, Health Centers, Medicare Part B, nonprofits, and other quality of life programs.”

For the first time, all households will be invited to complete the Census online. In mid-March, addresses will receive a mailed invitation to respond online. If there is no response to the online invitation, a paper form will be mailed with options to respond to the form or by phone.

More information about the 2020 Census and the Municipal Complete Count Committee can be found at louisvilleky.gov/census, or contact Catalina Cordova, Louisville’s Census Coordinator at Catalina.Cordova@louisvilleky.gov or at (502) 574-5040.