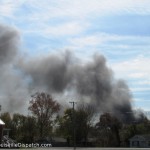 As of Monday, regulators say that the tire pile that caught on fire in southwest Jefferson County last November is still smoldering. The fire is currently covered by layers of soil, which according to the regulators, is the only thing preventing the fire from re-igniting. At this time, it is unclear how the fire could continue to smolder.

The fire was at Liberty Tire Recycling, in the 14000 block of Bohannon Dr in southwest Jefferson County.  Area residents have reported minor property damage from soot as the thick black smoke from the burning fires settled to the ground and some have expressed concerns for their children and pets as a result.

The Kentucky Energy and Enivornment Cabinet and the parent company of Liberty Tire reached an agreement on $40,000 in fines and several conditions that need to be met. State officials stated that tire company is complying with all conditions.