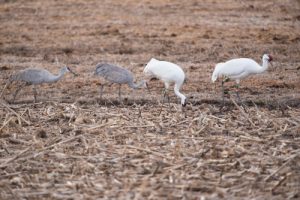 With sandhill crane hunting season opening the third weekend in December, the Kentucky Department of Fish and Wildlife Resources is issuing its annual advisory to hunters to watch out for federally protected whooping cranes.

The whooping crane is an endangered bird that may not be hunted. The Eastern Population of whooping cranes migrates between Wisconsin and Florida, with their main migration corridor taking them through west-central Kentucky. There are 107 whooping cranes known in this population.

Wildlife biologists have confirmed the presence of six whooping cranes in Hopkins County. In previous years, whooping cranes have also been sighted in several other locations, including Barren County.

Kentucky’s sandhill crane hunting season begins Dec. 17 and continues through Jan. 15. The season will end sooner if the quota of 400 birds is taken prior to Jan. 15. Hunters who have applied for this quota hunt and been drawn to participate must successfully complete an online sandhill crane identification course before they can receive a permit.

Whooping cranes are solid white with black wingtips. They have a red crown. Adults may have a wingspan of 7½ feet and stand up to 5 feet tall on stilted legs. Juvenile birds are similar to the adults, but will have patches of brown or tan mixed in with the white.

Hunters should always be sure of their target before firing a gun, regardless of the species being hunted.