Kentucky Afield Outdoors: Closing Out 2016 With A Look Ahead 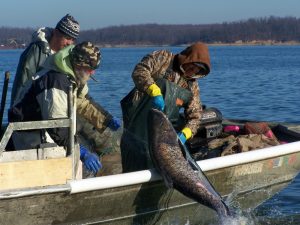 The end of the year is a time for reflecting on the past 12 months and envisioning the possibilities for the new year.

Officials with the Kentucky Department of Fish and Wildlife Resources recently previewed what’s ahead in 2017.

From firming up long-range plans for the restoration of ruffed grouse in Kentucky and management of the state’s black bear population to expanding the popular Fishing in Neighborhoods (FINs) program and releasing thousands of rare mussels into the wild, a common theme stretches across the Fisheries and Wildlife divisions. Conserving fish and wildlife habitats and populations and expanding opportunities for hunters, anglers and others are top priorities.

In Fisheries, Asian carp will continue to be a major focus. Commercial harvest is an effective tool for large-scale removal of the invasive fish and Fisheries director Ron Brooks said a multi-year effort to help the Asian carp processing industry expand in Kentucky is expected to bear fruit in 2017.

“We’ve been working on this for about two years and it’s finally coming around,” he said.

The department has been working with fish processors, commercial fishermen, legislators, government agencies and businesses to find ways to make a greater dent in the Asian carp population.

“We’re reaching out to help the Asian carp-harvesting industry meet its needs and hopefully lead into expansion of their businesses, all to get rid of Asian carp,” he said.  “We’re focusing a lot of our efforts on Kentucky and Barkley lakes because we believe we can have an immediate impact there. We’re trying to ensure our sportfish species aren’t taken out.”

Elsewhere in Fisheries, a long-term project to increase forage and improve fishing opportunity at Cave Run Lake will wrap up in 2017. The project focused on the Ramey’s Creek and Warix coves in 2016. Department personnel added around 1,000 trees, 500 pallet structures, 150 bucket stake attractors, 10 wooden cable spools and 50 plastic pipe trees. A map showing the locations of these fish attractors is available online at fw.ky.gov. Type “Cave Run Lake Fish Habitat Improvement Project” into the search box on the homepage.

The popular Fishing in Neighborhoods (FINs) program is adding five new lakes to its lineup: Flemingsburg Old Reservoir in Fleming County, Kess Creek Park Lake in Graves County, Leary Lake in Grant County, Logan Hubble Park Lake in Lincoln County and Rotary Park Lake in Hickman County. The addition of these lakes brings the number of FINs lakes to 43 across the state.

Anglers can start planning now where they want to fish and for what species in with the new Fishing Forecast for Kentucky’s major fisheries. The 2017 edition is available on the department’s website by clicking on the “Fish” tab and choosing “Forecast” from the dropdown menu. The annual compilation highlights new, expanding and improving fisheries across the state.

Deer hunters in Kentucky have enjoyed another successful season in 2016.

“We’re going to end up in the top 5 in terms of our overall harvest total,” said Steve Beam, Wildlife Division director for Kentucky Fish and Wildlife. “We’re producing tremendous numbers of trophy quality bucks. At the same time, our herd is healthy. Things continue to be wonderful.”

At its December meeting, the Kentucky Fish and Wildlife Commission voted to expand opportunities for youth and muzzleloader deer hunters on several wildlife management areas in 2017. The 2017-18 Kentucky Hunting and Trapping Guide, due out in July, will note these and any other pertinent changes.

John Hast was a biologist in the department’s deer and elk program before taking over as coordinator of its bear program in January 2015. He anticipates having a draft of a long-range management plan for Kentucky’s black bear population ready in 2017.

“We’ve been doing in-house research since bears returned to the state,” Hast said. “We just completed the project that’s going to provide our foundation for management for the next 15 years.

“A management plan, to me, gives me an opportunity to summarize all of that data and put it in one spot and distill it out and translate it. The plan will set forth what we’ve got but also what we’re going to be doing in the near future to refine things.”

Also in 2017, expect to hear more from the department about wild pigs in Kentucky, Beam said.

“We have re-evaluated and are in the process of increasing our efforts on wild pig eradication, working with landowners and cooperating with our partners,” he said.

In the department’s Wildlife Diversity program, led by coordinator Sunni Carr, biologists plan to conduct a statewide survey of osprey nesting locations and also start a loggerhead shrike banding project in the hopes of learning more about the migration and causes of decline for the species.

Additionally, the statewide survey for eastern whip-poor-wills and chuck-will’s-widows will be expanded to examine trends for Kentucky’s night birds. The department’s Center for Mollusk Conservation (CMC) plans to release endangered pink muckets in Kentucky for the 10th year. There are now several thousand of these mussels at more than 23 locations.

The department’s website provides a wealth of information about the work being done by each of these divisions. While there, consider purchasing a 2017-18 hunting and fishing license. The new license year starts March 1.