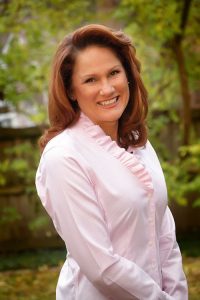 First Lady Glenna Bevin today attended the Women’s Auxiliary Spring Luncheon held at the Southern Baptist Seminary in Louisville. Mrs. Bevin spoke in front of an audience of 300 women, where she shared how her personal experiences have influenced her passion for children and those in the Kentucky foster care system. After being involved in the Southern Baptist Seminary for many years, the Bevins established the Bevin Center for Mission Mobilization in memory of their oldest daughter, Brittiney, who had an incredible passion for children and mission work.

“I have raised my children to be the hands and feet of Christ,” said Mrs. Bevin. “We have children here in Kentucky who are going to bed hungry, abused, and that don’t know Jesus loves them. That shatters everything inside me.”

Mrs. Bevin stated that there were many reasons her husband decided to run for governor, but one in particular was to correct Kentucky’s broken foster care system. Prior to adopting four children from Ethiopia, Gov. and Mrs. Bevin attempted to adopt an 11-year-old girl in Kentucky. However, their application was denied due to the many unnecessary regulations in the state’s foster care system.

“My reasons for being here are not to tell you my story. My reasons are very, very, selfish,” said Mrs. Bevin. “I am here to call on you to be my foot soldiers in this battle for Kentucky’s children. We have to take advantage of our programs and educate ourselves on the issues that Kentucky kids face today. Step out of your comfort zone, rethink your plans, your missions, and to pray for God’s guidance in making Kentucky your mission field.”

This call to action follows the Gov. and First Lady’s Open Hearts/Open Homes summit held in March. This was a collaboration between the Governor’s Office and the Cabinet for Health and Family Services. There, state officials called on communities to take action and provided inspiring, but sobering education as to the current situation within Kentucky’s foster care and adoption systems.