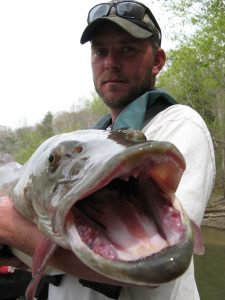 Spring break for many conjures thoughts of traveling somewhere warm and catnapping on a beach between rounds of golf.

A staycation sounds much better if you’re a muskellunge angler from Kentucky. The state’s muskellunge fishery has earned a reputation that extends beyond its borders, and experienced anglers know spring is one of the can’t-miss times of the year.

“Your odds of catching a trophy are better in the spring and fall,” said Tom Timmermann, northeastern fisheries district biologist for the Kentucky Department of Fish and Wildlife Resources. “In the fall, they’re packing on that weight to get through the winter. In the spring, if you catch those females before they release their eggs, they’re full of eggs. Either way, you’re looking at a chance at some bigger fish.”

Kentucky lies within the natural range of the Ohio strain of muskie, but the population in lakes and streams now is supported with stocking.

The bloodlines of these young predators trace to broodstock collected each spring from the Licking River. Kentucky Fish and Wildlife’s Minor Clark Fish Hatchery at the foot of Cave Run Lake Dam raises every muskellunge stocked in Kentucky.

Buckhorn, Cave Run, Dewey and Green River lakes are managed as trophy fisheries and there is a 36-inch minimum size limit in place on each. A 30-inch size limit for muskellunge is in effect elsewhere in the state

Cave Run Lake reaches into parts of Bath, Menifee, Morgan and Rowan counties and it produced the current state record in 2008. The 47-pound bruiser measured 54 inches.

Mike Hardin grew up fishing the lake and this past fall released a 50-incher caught on a homemade inline spinner.

“I believe they’re probably right there and ready to go pretty soon,” said Hardin, an assistant fisheries division director with Kentucky Fish and Wildlife. “The cold weather may slow things down a little bit but they’re already making that march.”

The longer periods of daylight and water temperatures climbing past 50 degrees trigger the muskellunge’s instincts to move shallow. Many anglers do well focusing on larger embayments, secondary cuts and flats because they warm up first.

Look for areas that offer food, vegetation or timber, warmer water and close proximity to deeper water. Scotts Creek, Warix Run, Buck Creek and Leatherwood on Cave Run Lake are popular spots in spring. Start at the points and work back to the shallows, casting to the bank and any structure or sub-surface features along the way.

“Those fish run up into the hollows seeking that flowing water,” Timmermann said. “The males are up there early and the females come up second. If you see a bunch of males, you know you’re still a little ways off from the big fish getting up there.”

Kentucky Fish and Wildlife is studying the impact of a 2010 regulation change that adjusted the size limits on Buckhorn, Cave Run and Green River lakes to 36 inches.

The same size limit went into effect last year on Dewey Lake in Floyd County. It is maturing as a muskie fishery after receiving its first muskie stocking in 2014. Sampling conducted this past fall found some of those fish had reached the minimum size limit.

At Buckhorn Lake in Leslie and Perry counties, catch rates have been better in the lower lake due to the habitat. “We have some larger shallow flats and there’s a lot of woody debris on those,” Kentucky Fish and Wildlife fisheries biologist Joseph Zimmerman said.

At Green River Lake in Adair and Taylor counties, the areas around the Emerald Isle and state marinas produce some of the better catch rates on the lake while the upper reaches of the Robinson Creek, Casey Creek and Green River arms offer large shallow flats worth exploring.

“The area behind the state marina is a good spot,” said Eric Cummins, southwestern fisheries district biologist with Kentucky Fish and Wildlife. “It’s wind protected and heats up quicker than some other parts of the lake.

“In the upper ends of the lake, you have warmer water dumping in at the mouths of those feeder creeks. If you have some stained water, muskie will slide up a little shallower and generally be more available to your shallower presentations.”

Many a bass angler pitching a crankbait or plastic frog has been surprised by a muskie. To have a fighting chance, it’s best to pair a 6-foot-6 or longer medium-heavy or heavy action rod with a 4.2:1 or 5.2:1 ratio baitcasting reel spooled with 65-pound or heavier braid. Wire leaders of 9- to 18-inches are a necessity because of the muskie’s sharp teeth.

Anglers should dip the rod tip into the water as a lure gets to within a few feet of the boat and draw a figure eight. Muskie are prone to stalk a lure and the figure eight can entice a boat-side strike.

“I don’t know how many fish I’ve had hit right at the boat and I’ve never seen them until I’ve made the turn,” Hardin said.

A guide once told Timmermann that muskellunge anglers should not be married to one spot in spring.

On Cave Run and Dewey lakes, anglers should inspect their boats and lures and discard any weeds before running to a new spot because of the presence of hydrilla, an invasive aquatic plant. Hydrilla was discovered just last year in Cave Run Lake.

“This is not a good thing for the lake,” Timmermann said. “Pay attention to what you’re moving and when you’re moving it. Clean your motors and trolling motors off before you move to a new spot and clean those weeds off of your baits.”

One more thing to remember before trying for the muskellunge of a lifetime this spring in Kentucky is a fishing license. The new license year started March 1. Consult the Kentucky Fish and Boating Guide for complete licensing information. It is available online at fw.ky.gov and wherever licenses are sold.