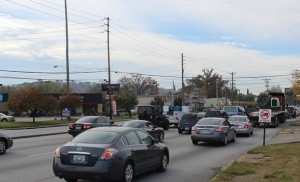 A long-awaited project to make a Watterson Expressway exit safer is underway, making travel into Shively and Dixie Highway more efficient and less hair-raising for drivers and pedestrians.

The construction is the first phase of an accelerated plan to improve safety and traffic efficiency throughout the Dixie Highway corridor – a comprehensive set of projects that will invest more than $50 million along the highway over the next two years in the city’s busiest highway.

Mayor Greg Fischer joined Congressman John Yarmuth and representatives from the Kentucky Transportation Cabinet and Metro Council to announce the beginning of the ramp realignment, and to preview the additional projects that will make the entire highway safer and easier to travel for both drivers and pedestrians.

“Traffic-choking designs like the current exit ramp make it difficult to get to our thriving businesses in south and west Louisville. This realignment will be a relief for every driver who travels in this area,” said Mayor Greg Fischer. “This project is the jump-start for a series of improvements that will transform Dixie Highway and our neighborhoods in the south and west.”

About the realignment project

The current exit from I-264 westbound onto northbound Dixie Highway is short, and funnels directly into Dixie Highway without a designated merge lane or stoplight.  Traffic often backs up along the ramp as drivers wait to safely move onto Dixie.

The project will realign the I-264 westbound ramp to Dixie Highway (US31) north into a T-intersection, including a traffic signal to safely move vehicles off the exit. The southbound lanes of Dixie are unaffected by this project.  A new sidewalk under the Watterson Expressway will be added later.

“This exit ramp is a white-knuckle journey for drivers, and it’s tricky for northbound Dixie vehicles to navigate as well,” said Matt Bullock, chief district engineer for the Kentucky Transportation Cabinet. “By improving this ramp, we’ll make arriving on Dixie Highway a safer, more welcoming experience for drivers and pedestrians.”

The realignment project will require the exit ramp to be closed for a total of nine consecutive days (including two weekends to limit traffic impacts). The contractor, Milestone, has not yet identified those closure dates.  The $724,000 project is scheduled to be completed by November.

“The City of Shively is excited for the project to begin, and we are looking forward to the changes it will create for us and all of Dixie Highway,” said Shively mayor Sherry Conner. “We are thankful for all the support we have received from all parties – whether it was financial or moral, we appreciate it.”

The ramp realignment is the first phase of a two-year construction plan for significant improvements throughout the corridor, called the New Dixie Highway Project. Those improvements will fuel transformation of a major economic corridor for southwest and west Louisville.

Fueled by a nearly $17 million federal TIGER grant, the New Dixie Highway Project will include new fiber-linked traffic signals, new concrete and landscaped medians, and a first-in-the-city bus rapid transit line from TARC to run between downtown and the Gene Snyder Freeway.

“The New Dixie Highway project is the largest concentrated investment in Louisville’s transportation network since we began the Ohio River Bridges Project,” Fischer said. “When complete, the new Dixie Highway will be safer for everyone, more efficient for motorists, more reliable for transit users and more enticing for business owners, consumers and investors.”

“This is another important step forward in making Dixie Highway safer and improving the commute for drivers and pedestrians alike,” said Congressman Yarmuth. “Transportation goes hand and hand with economic growth, so I’ll continue to work with federal, state, and local leaders to make sure we pursue every opportunity available to fund these critical projects.”

The project is currently up for bid through the Kentucky Transportation Cabinet, and construction may begin as early as this fall, with completion expected in December 2019.