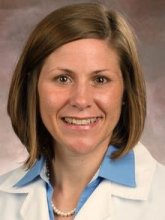 The Louisville Metro Department of Public Health and Wellness has named Dr. Lori Caloia its new medical director. She comes to the department from Norton Healthcare where she was a primary care physician. She also worked at the University of Louisville School of Medicine where she served as an Assistant Professor.

Dr. Caloia holds Diplomate certification from the American Board of Family Medicine and is licensed to practice in Kentucky and Indiana.

She succeeds Dr. Sarah Moyer as medical director of the Department of Public Health and Wellness. In July Louisville Mayor Greg Fischer named Dr. Moyer the director of the department and the city’s chief health strategist. Prior to be being named medical director, Dr Caloia had been providing back-up on-call medical coverage for Public Health and Wellness on an as-needed basis.

“Dr. Caloia is a wonderful addition to our staff,” said Dr. Sarah Moyer. “She has really hit the ground running with us. Her clinical and academic background is serving us well. She brings a high degree of dedication and competence to her work at Public Health and Wellness.”

Dr. Caloia earned an M.D. from the Michigan State University College of Human Medicine (MSU-CHM) in 2004. She completed a transitional internship at the San Antonio Uniformed Services Health Education Consortium from 2004-2005 and a Family Medicine internship at Southern Colorado Family Medicine Residency in 2010-2011. She finished a residency at Fairfax Family Practice (Virginia Commonwealth University) in 2013.

Dr. Caloia went on to serve in various Air Force supervisory roles as well as directing a Flight Medicine Clinic in Bagram Afghanistan during a deployment from 2007 to 2008. She eventually became the Chief of Flight Medicine at Peterson Air Force Base in Colorado.

“Serving as a Flight Surgeon in the Air Force prepared me well for working in public health,” she said. “I had to respond to pertussis and shigellosis outbreaks on our military base. I had to insure safe food handling and oversaw swimming pool inspections. I was involved with response planning for chemical exposures and other preparedness programs. I supervised a TB screening program and was the one who chased down air crews to get their flu shots.”

From 2013 to 2015 Dr. Caloia served as a physician for the University of Louisville Campus Health Services. There she was part of a team that initiated a depression screening tool which led to a much higher recognition and treatment of depression in the student body.

Dr. Caloia’ s many awards include the Outstanding Faculty Award from the U of L Family Medical Residency, the Top Resident Teacher Award from Virginia Commonwealth University and the Major John Gillespie Award for Excellence in Medical Knowledge, Clinical Judgement and Medical Ethics.

Dr. Caloia is married to Jeff Ray, a pilot and retired F-15E Weapon Systems Officer (WSO). They have a 9 year-old son, Jacob.