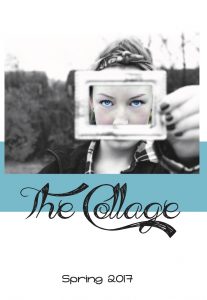 Ballard High School’s The Collage was named the best student-produced literary magazine in Kentucky, earning a ‘Superior’ rating and a nomination for the Highest Award by the National Council of Teachers of English (NCTE).  The recognition is the second time in three years that the publication has taken the top ranking by NCTE’s Program to Recognize Excellence in Student Literary Magazines (PRESLM), and makes The Collage the highest awarded literary magazine in Jefferson County Public Schools.

Nationally, only 26 student publications, out of 372 entries, were named Highest Award recipients.

Ballard’s in-house literary magazine has been produced and published by students, for students, since 1970, and showcases student written and artistic work in all genres, themes and grades.  The magazine is a project-based learning collaboration between the creative writing classes of Michelle Livesay and the digital publishing classes of Gary Crume with student fine art submissions from Ballard art teachers Patty Bradford, Lindsey Dobson, Emily Forrester, Marcia Hageman and Sarah Kaiman.

A limited number of copies of the award-winning 2017 edition are available by contacting michelle.livesay@jefferson.kyschools.us or gary.crume@jefferson.kyshools.us.