Louisville Proposal Is A Finalist In Bloomberg Philanthropies’ 2018 Mayors Challenge 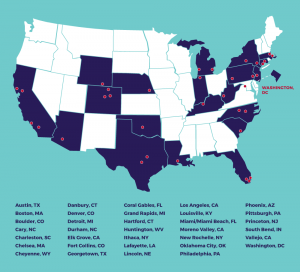 Chosen from a competitive pool of more than 320 applications, the Champion Cities will now begin a six-month testing phase where they will conduct public prototypes of their ideas with grant funding of up to $100,000 per city.

Louisville’s proposal, developed by the city’s Office for Civic Innovation, Louisville Metro Police and community partners, proposes building on the recently installed gunshot detection system Shotspotter to dispatch aerial drones in the seconds after shots are detected. The aerial drones could help officers win valuable time in capturing critical evidence from crime scenes, aiding investigations in a way that reduces the privacy concerns of static cameras.

“When our city is confronted with a major challenge, we respond in a big way. That’s why we implemented our six-point violence prevention strategy last year, and why we focused on public safety in entering this prestigious national challenge,” Mayor Greg Fischer said. “Louisville’s finalist status in the 2018 U.S. Mayors Challenge is a testament to the creative, entrepreneurial spirit that makes our city one of the most innovative in the nation.”

The Mayors Challenge returns to the U.S. as the first investment in the American Cities Initiative, a $200 million suite of new and expanded programs that will empower cities to generate innovation and advance policy that moves the nation forward.

During the six-month “Test, Learn, and Adapt” phase of the competition, cities will refine their ideas using up to $100,000 in funding, as well as personalized support from innovation experts, as they prepare a new application for additional support by August 2018.

In October, four cities will receive $1 million awards and one will receive a grand prize of $5 million to bring their ideas to life.

“We received hundreds of bold and creative ideas from cities around the country in response to the 2018 Mayors Challenge, and these 35 really stood out for their potential to improve people’s lives. The next six months are a great opportunity for the cities to test their ideas and make them even more innovative and effective,” said Michael R. Bloomberg, founder of Bloomberg Philanthropies and three-term Mayor of New York City.

The 2018 Mayors Challenge builds on the success of previous Bloomberg-sponsored Challenges in the U.S. (2013), Europe (2014), and Latin America and the Caribbean (2016). For more information, visit mayorschallenge.bloomberg.org and @BloombergCities on Twitter and Instagram.