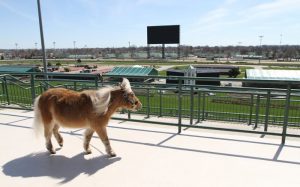 After spending most of his life as the tiny ambassador of the Kentucky Derby Museum, Winston is announcing his final weeks at the Museum. On Monday, March 5, 2018, Winston will head to Old Friends’ Thoroughbred Retirement Farm, where he’ll join several former Kentucky Derby champions and fellow miniature horse, Little Silver Charm.

Winston came to the Kentucky Derby Museum at two years old, in the fall of 1995. He’s been the companion horse to more than 30 resident Thoroughbreds, including three horses that ran in the Kentucky Derby, Perfect Drift, Phantom on Tour and Twinspired, as well as Kentucky Derby 135 winner, Mine that Bird.

He’s also thrown out the first pitch at the Louisville Bats game, helped Churchill Downs pick the Derby winner ahead of the race, supported many charitable organizations around town and performed more than ten marriage proposals with his “Will You Marry Me?” blanket!

“Winston spent most of his life at the Kentucky Derby Museum. He’s been our super star. Whether it’s an appearance in the stable at the end of the historic walking tour or through a picture on social media, Winston has created lasting memories for our visitors,” Kentucky Derby Museum President Patrick Armstrong said. “Now as we gear up to begin work on the Museum’s expansion, including construction of a new stable area, the time was perfect for Winston to make the move to Old Friends. We know he’ll continue to shine in his new home, charming visitors as he has done here for 23 years.”

“Everyone at Old Friends is very excited to have a horse of Winston’s tremendous stature retired at the farm,” said Old Friends founder and President Michael Blowen.”Everyone, especially Alison Knight, at the Kentucky Derby Museum has taken great care of this wonderful celebrity, and we’ll keep up the standards. His fans will know he’s just down the road.”

On February 21st and February 28th, the Museum is inviting everyone to help give Winston an amazing send-off into retirement with Winston Wednesdays! Guests can visit with him at the Museum, sign a jumbo card, get a free special edition signed print by Katie Upton of Phantom on Tour and Winston, and enjoy Winston-themed cookies, while supplies last, and more!

Visitors can also watch Rickelle Nelson, equestrian artist of Deck the Stalls, (and front desk manager at the Museum!) create a live portrait of Winston.

Winston’s final day at the Museum will be Monday, March 5th. He will enjoy a special send off to Old Friends following the Museum’s groundbreaking ceremony for its new multi-million dollar expansion project.