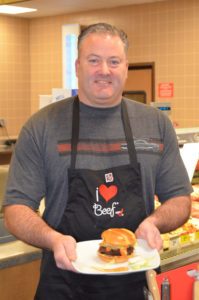 Jay Neubacher of Louisville is taking home the title of Derby Burger Champion, in the 7th Annual “Derby Burger Challenge” sponsored by Kentucky Beef Council and coordinated by the Kentucky Derby Festival. Neubacher’s recipe for his “D to the Double B” Burger (Derby Bourbon Burger) was selected as the overall winner after a cook-off this morning at the Kroger in Middletown. It features ground beef, a five spice rub with bourbon smoked paprika, hickory smoked bacon, baby bella mushrooms, onions, chipotle peppers in an adobo sauce, and melted provolone cheese, all served on a brioche bun.

Tailgating at UofL’s football games last season helped lead to this year’s winning burger. “I brought a different burger to each home game and asked my friends to sample and tell me which one they liked best,” said Neubacher. “At the end of the season, the Derby Bourbon Burger was their top choice. The five ingredient spice rub is what makes it unique and helps marry all the flavors together.”

The Festival received dozens of submissions for the annual competition. More than 9,000 beef lovers voted online to help pick the top 4 finalists. At the final cook-off, a panel of judges determined the overall winner based on points accumulated from four factors – Taste, Appearance, Creativity and Ease of Preparation. Alexis Rich of Louisville finished runner up with her Juicy Lou-cy Burger. Other finalists included Lori Poe of Mt. Sterling, Kentucky, with the Asian Burger and Gregory Schaad of Louisville with the Trifecta Burger.

Neubacher’s winning Derby Burger recipe will be available to try at Kroger’s Fest-a-Ville this year during its nine-day run, as well as sampled at BeerFest Presented by American Founders Bank, and recognized in Louisville-area Kroger stores. In May, it will be a featured menu item at Louisville’s Napa River Grill. It will also be featured as part of the grilling series at Turnip the Beet’s summer kids cooking classes.

Neubacher also receives VIP tickets to Thunder Over Louisville, VIP Experience at Waterfront Jam, tickets to BeerFest, as well as a $100 gift certificate to Kroger and a grilling package from Kentucky Beef Council.

From now to April 13, all purchasers of fresh ground beef at any of the 40 Louisville area Kroger stores will receive a coupon at checkout (on the bottom of the receipt). The message includes an entry code to register online at www.kdf.org/beef for a chance to win VIP tickets to a Waterfront Jam Concert at Kroger’s Fest-a-Ville or BeerFest Presented by American Founders Bank.