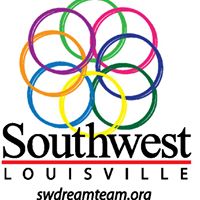 Mayor Fischer, the Southwest Dream Team and Metro Council members were joined by local business owners and residents to unveil the 2018 edition of the South Points Scenic Area Map. It is the fourth rendition of the map, which has expanded its outreach year over year to include more local businesses and attractions, including this year, Kentucky Kingdom and Hurricane Bay.

Also new to this year’s map is an inaugural food district, called “Dine South Points,” which highlights the cultural eateries of the South Points Scenic Area, near Iroquois Park and south to Fairdale. Some new restaurants to be featured in the food district are: Vietnam Kitchen, Binh Phuoc Market, Cocoberry Pops, Shack in the Back BBQ, Golden Wall, La Riviera Maya, Sunergos Coffee and Vietnam Oriental Food Market.

The diverse range of businesses included in the map shines light on the wealth of cultural diversity that lies within the South Points Scenic Area. Louisville Metro and the Southwest Dream Team are proud to support these businesses and invite new businesses to consider participating in next year’s map.

“South and southwest Louisville continues to experience positive economic development, and is a tremendous source of pride for our entire community,” said Fischer. “The number of locally owned businesses and attractions continues to grow, with attractions serving residents and visitors from near and far.”

It is the mission of the Southwest Dream Team to promote economic development in south and southwest Louisville. The South Points Scenic Area was created in 2013 to promote the many tourism-related business and cultural and natural attractions that the area has to offer.

A mobile version of the map can be viewed at www.southpoints.org, and @SPScenicArea on Facebook and Twitter. For more information and to join the conversation visit www.swdreamteam.org, and follow @SWDT on Twitter to stay updated on the work of the Southwest Dream Team