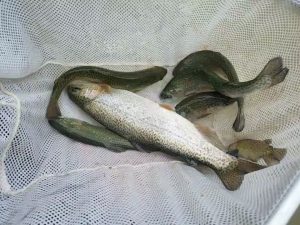 The fisheries division of the Kentucky Department of Fish and Wildlife Resources recently added some bigger rainbow trout to its usual stockings at streams in three popular tourism destinations.

“We are trying to stock an average of 12-inch trout instead of the usual average of 9-inch trout,” said Tom Timmerman, Northeastern Fisheries District biologist for Kentucky Fish and Wildlife. “When we stock 12-inch average trout, some of them are larger.”

Crews stocked the Middle Fork of Red River and East Fork of Indian Creek April 4 and Rock Creek April 5. They placed 650 rainbow trout in the Middle Fork of the Red River and 850 trout in the East Fork of Indian Creek, with 100 of those fish in each stream of a larger size. Rock Creek received 2,075 trout with 275 of those fish of a larger size.

The increased size of the stocked trout is part of an effort to lure more anglers to these streams. “We want to make these destination streams and give someone incentive to come to Kentucky and trout fish the Red River Gorge area or Rock Creek,” said Justin Heflin, assistant fisheries biologist for the Northeastern Fisheries District. “If you are coming from a good ways, you want to catch a good fish.”

The stockings of larger trout will continue in October on these streams. “When we stock larger fish, it does slightly reduce the total number of trout stocked, but should not impact fishing success,” said Ron Brooks, director of Fisheries for Kentucky Fish and Wildlife. “We are limited on the number of big trout available and are concentrating on these three streams with these stockings.”

These waters fall under special catch and release regulations for trout from Oct. 1 through March 31. During this fall/winter season, all trout caught must be released immediately.