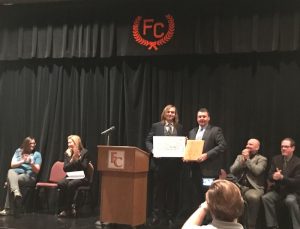 Fern Creek teacher Lauren Neimann and Fern Creek Class of 2018 graduate Jack Leppert were presented with the award on October 11 during a ceremony at the school. The annual award honors public service employees, volunteers or students who have gone to great lengths to make Louisville a clean, green and healthier place to live, work and play.

Leppert earned the award for a project he designed to renovate the school’s senior courtyard. The renovation included green infrastructure and storm water mitigation as well as a space where students could spend time and relax. He received a $5,000 grant from the Partnership for a Green City and worked throughout the summer to see his project come to life.

“Jack Leppert is a perfect recipient of the Joan Riehm Award because he took the passion he gained from his teacher and literally became the change he wanted to see at Fern Creek High School,” said Dr. Glenn Baete, JCPS assistant superintendent of high schools. 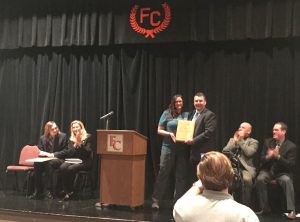 “She is that incomparable teacher we remember from our own school days and the teacher we hope our children experience,” Dr. Baete said. “Her love of teaching, motivational methods, and passion for students are inspirational to those who come in contact with her as well as her community at Fern Creek High.”

The Joan Riehm Memorial Environmental Leadership Award was created after Riehm’s death from pancreatic cancer in 2008. Riehm became the first female deputy mayor for the city of Louisville in 1985. She left government 10 years later to serve as a consultant specializing in public issues management and communication, but returned to city government in 2002 to co-chair the merger transition team.