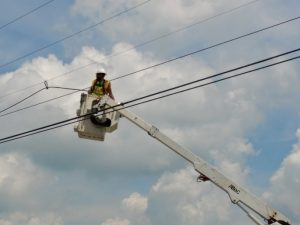 The City of Williamsburg issued the bonds for the KentuckyWired Infrastructure Company.  The Series 2019 municipal bonds were purchased by Morgan Stanley.

The majority of the proceeds—$93 million—will be used to fund the settlement agreement between KCNA and its primary contractor, NG-KIH Design Build LLC.  The remainder will be held to fund project needs.

According to KCNA Interim Executive Director Deck Decker, KCNA was able to save millions of dollars through the structure of this deal and favorable market conditions. “KCNA was able to access a market with historically low rates to reap maximum benefit from this deal,” he said.

Construction of the KentuckyWired project is well over halfway complete, with more than 1,700 miles of the planned 3,000 miles of fiber cable placed so far. Construction is complete in the first section from Lexington to Louisville and Cincinnati, known as Ring 1A. Construction of Ring 1B, in Eastern Kentucky, is projected to be finished in early September.

Along its 3,000-mile path, private companies can connect to the network and lease its fiber. This will enable private internet companies to expand their service farther into more rural areas. KentuckyWired will significantly enhance opportunities for education, healthcare, economic investment and job growth for Kentuckians.