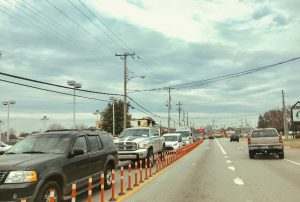 Crews on The New Dixie Highway Project are completing median construction on a critical, busy section of the roadway in the heart of Shively. The section between Herbert Avenue and Crums Lane, which includes Shively City Hall and the on-ramp to I-264, will have all lanes open and in their final configuration on Monday.

The opening of all four lanes in this section will be a significant improvement for drivers. For the past six months, there has been only one southbound lane on this busy section of roadway – which carries an estimated 60,000 vehicles a day. For about a month, there has also only been one northbound lane on that section.

As with the rest of the project, the final surfacing and landscaping is slated for completion during the spring and summer of 2020.

“We appreciate the patience of everyone who drives this section of highway,” said Project Manager John Callihan. “We drive it too, and we know it has been frustrating at times. But the result is a safer, more efficient roadway for all of us.”

Drivers should continue to stay alert to shifting work zones on Dixie Highway. In addition to the opening of lanes between Crums and Herbert, work crews will also be reopening lanes between Greenwood Road and Wells Drive as well as between Meyer Lane and Upper Hunters Trace.

Median work will shift to other locations, causing new lane closures between Gagel Ave. and Kendall Road.  The existing lane closure between Blanton Lane and Meyer Lane will remain in place as work continues.

By installing medians, The New Dixie Highway Project is restricting mid-block left turns – and guiding drivers to turn at signalized intersections or designated U-turn points.  Installing medians is both the most transformative part of The New Dixie Highway project – but also the most dangerous for workers because they will be working in the middle of the roadway with traffic on both sides.  Video about the medians and about the use of U-turns on Dixie Highway are available on YouTube.

Medians are “non-mountable” so passenger vehicles cannot drive over them. Widths will vary with available space – with landscaping at key locations. While it may seem counter-intuitive to drivers, restricting mid-block left-turns creates not only a safer corridor, but a more efficient corridor. Some drivers will have to drive slightly further to reach their destination, but the improved efficiency and reduction in collision-related congestion will mean a better traffic flow for everyone.

The New Dixie Highway Project broke ground in December of 2017, and all the major components will be complete in December 2019.