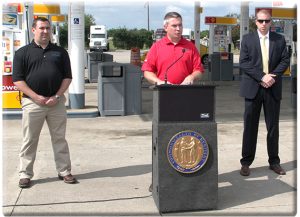 National Ag Day is today, and it is a good time to reflect on some of the many ways agriculture affects us every day.

Agriculture is a major economic driver in Kentucky and the United States. Nationally, it is one of few sectors that can boast a trade surplus. In Kentucky, agricultural exports totaled an estimated $1.46 billion in 2015. A University of Kentucky report found that agriculture and related industries in Kentucky had an estimated economic impact of $45.6 billion and accounted for more than 258,000 jobs in 2013.

Agriculture, of course, feeds us all. We rely on farmers and food manufacturers to produce the abundant and affordable foods and beverages that we all depend on – and often take for granted. Thanks to the productivity and efficiency of U.S. agriculture, Americans spend an average of only 9.7 percent of their income on food – the lowest in the world.

Of course, that is not true of all Americans. The lowest 20 percent of the population based on earnings pay as much as 35 percent of their income to feed themselves and their families. Some have to make hard choices to make ends meet. This situation is intolerable, and that is why we launched the Kentucky Hunger Initiative and assembled the Hunger Task Force last year. You can help by checking the box on Line 33 of Form 740 to donate part of your state tax refund to the Kentucky Farms to Food Banks Trust Fund. Together, we can make a difference in the lives of Kentuckians in need.

We thank everyone who has liked, shared, and retweeted our posts! Many organizations, businesses, and individuals have used the hashtag to mark their own Kentucky ag-related posts. We hope you will watch for more #KyAg365 posts and discover amazing facts about Kentucky agriculture.

On National Ag Day, I hope you will take a moment to consider how your food is produced and where it comes from. And as always, if you like to eat, thank a farmer!