While acknowledging there is much work to be done, and the city’s homicide numbers are still troubling, Chief Conrad, Rashaad Abdur-Rahman from the city’s Office for Safe and Healthy Neighborhoods, and Yvette Gentry, Chief of Community Building, told the Council today that there is positive movement in both short and long-term violence-prevention strategies.

They focused their presentation on six pillars of the overall strategy: Enforcement, intervention, prevention, community mobilization, organizational change and development, and re-entry. They also addressed Council questions on spending of public safety funds allocated in December, as part of a mid-year budget adjustment. 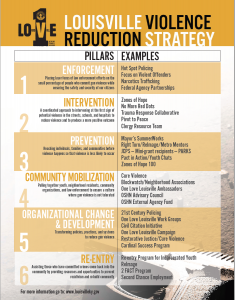 Chief Conrad said that since Nov. 1, LMPD’s newly expanded Narcotics Division has made 244 felony arrests and 59 misdemeanor arrests; and executed 169 searches, uncovering 57 pounds of heroin, 40 pounds of cocaine 73 points of meth and 125 guns.

And the additional funding allocated in December so far has covered 13,709 hours of overtime that allowed for increased patrols in the neighborhoods where violent crime has been most pressing — Park Hill, Russell, Shawnee, Shelby Park, Smoketown and Victory Park.

The Chief said he recently revised the increased patrols to be more strategic about when officers are deployed. “We want to be smart about spending these tax dollars, and mindful not to lean so heavily on overtime that we wear out our officers, who are extremely dedicated to this battle,” the Chief said.

Louisville Metro Police has hired 14 additional officers who are in training now and plans to hire 14 more this summer.

Abdur-Rahman and Gentry said OSHN also is using expanded resources to focus on locations where there are more violent crimes involving youth, and efforts to create pathways away from violence through training, support and educational assistance.

They stressed that OSHN’s charge is long-term, focused on identifying and alleviating many of the root causes of violence, including economic and educational challenges as well as historic, systemic barriers to success for people in the neighborhoods most plagued by violent crime.

But they also pointed to indicators of success, including 100 people who found jobs through Zones of Hope, and 158 young people involved in ReImage, which helps stop the cycle of crime and violence by intervening with youth who’ve been charged with a crime or are at high risk of criminal behavior. Of those 158, 78 have gotten jobs, three have gotten a GED, and 17 have either completed a degree or started college.

OSHN represents a holistic approach in coordinating the efforts of many city agencies and partner organizations, ranging from Metro Parks and Recreation to the Louisville Urban League, Peace Education and Neighborhood House. Through those partnerships, OSHN is engaged with such programs as Zones of Hope, No More Red Dots, Pivot to Peace and, most recently Cure Violence, a cutting-edge method to reduce neighborhood violence by using the same health strategies used to fight infectious diseases.  Cure Violence experts from Chicago were in Louisville last week for an assessment visit and training.

Funding for Cure Violence ($83,000) was part of a $625,000 allocation set aside for violence reduction efforts in the budget adjustment. Gentry and Abdur-Rahman outlined spending plans for the rest, including $120,000 to boost OSHN staffing from four full-time staffers to seven, as well as funding for Urban League and Peace Education programs, and  143,000 to external partner agencies for other, smaller programs focused on reducing violence.

“Just as there is no one reason for violence, there is no one solution for alleviating it,” Abdur-Rahman said. “Together, we’re investing in our youth, supporting young people who are trying to change their lives. That, in turn, helps all of us build a safe, more vibrant community.”