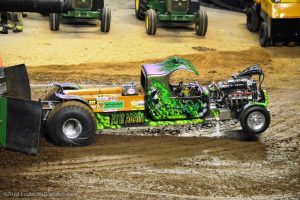 For fans who want to catch the high-horsepower action of the National Tractor Pull Championship, today is their last opportunity for the 2018 edition of the event, which is celebrating its 50th year in Freedom Hall this year. The finals will feature  a variety of tractor sizes and stocks as well as 2-wheel drive Super Modified Trucks.

Visitors will be on the edge of their seats as they watch drivers use their trucks and tractors to drag the massive weighted sled down a dirt track.  The sled (Bauer Built’s Iron Man) weight varies from class to class, but some of these vehicles are hauling more than 20 tons down the short 250 foot track.

Qualifying heats have been running since Wednesday for the finals tonight, which will feature such previous winners such Steve Bunnage from Golden Gate, IL as he tries to beat his Wednesday night result of 232.062 feet. The 2-wheel modified trucks will feature three lady drivers, including Bethany Nelson from Altamont, IL who won the heat last night by going 223.952 feet.

The Championship starts tonight at 7:00 PM with an early showing at noon and tickets are still available. As always with the Exposition Center, there’s a $8 per vehicle charge for parking. If you arrive early to get a good parking spot, the National Farm Machinery Show is open until 6:00 PM and admission is free.