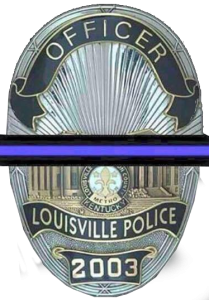 Councilwoman Cheri Bryant Hamilton (D-5) will host a special ceremony for the unveiling of an honorary street sign in memory of Officer Nick Rodman who died in the line of duty in 2017.

“We will honor his service and dedication to the people of Metro Louisville with signs at the very place where he served; the LMPD First Division Police Station,” says Hamilton. “We continue to mourn his passing. He left us too soon in life and he was an example for all of us for his dedication to public safety.”

“Our city mourns the loss of Officer Rodman, who gave his life to protect ours, and for that we are all eternally grateful.  I ask the citizens of Louisville to take a moment and pause to say a prayer for our police officers as they serve and protect a great city every day,” says President James.

“Every day police officers step out, they understand the dangers and responsibilities of their calling. Officer Nick Rodman understood this, yet he did not hesitate when he heard the call over the radio. He responded with courage in service of this community. He made the ultimate sacrifice – a sacrifice that many of us will never contemplate,” says Councilman Lanshima.

Officer Rodman left behind his wife Ashley, his children Mason and Ellie, his parents George and Linda, his siblings Andy and Carly as many friends and colleagues. He followed in his father and brother’s footsteps by becoming a LMPD officer in 2013.

The ceremony is being on the same date when he lost his life one year ago. He was murdered when the suspect intentionally crashed his vehicle into Officer Rodman’s patrol vehicle as Officer Rodman was trying to pursue him. He was 30 years old at the time of his death.

He was a native of Louisville and an outstanding student and athlete at Holy Cross High School where he graduated with a 4.0 GPA and held the honor of being an All District, All-Region football player and All-Star soccer player. He continued his education and successes at Georgetown College where he graduated with a Bachelor’s Degree in Kinesiology and served as the vice president of his fraternity, Pi Kappa Alpha.

Three honorary street signs will be placed in the following locations; the corner of North 29th Street and Griffiths Avenue, the corner of

The signs will be designated as “Officer Nick Rodman Way.”

The unveiling ceremony will take place in front of the LMPD First Division Station on Thursday, March 29th beginning at 4:00pm.