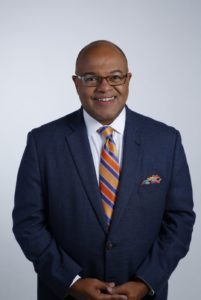 NBC Sports’ Mike Tirico, host of the 2018 PyeongChang Olympics, will be the featured speaker at the 62nd Annual They’re Off! Luncheon on Friday, April 20. The luncheon, first held in 1957, serves as the time-honored kick-off to each year’s Festival. It’s the second-oldest event on the Festival schedule.

“I feel like I know Mike already, after spending two weeks watching and cheering on our Olympic athletes,” said Mike Berry, Kentucky Derby Festival President and CEO. “We’re excited to welcome him to Louisville and to hear his stories.”

The luncheon begins at 11:30 a.m. in the Grand Ballroom of the Galt House East Hotel – site of the festive event since 1974. This year’s event will also feature the presentation of the Kentucky Blood Center Volunteer of the Year Award and the Fifth Third Bank Silver Horseshoe Award for service to the community. Tickets are $85 each or $680 for a table of eight. To purchase tickets or to get additional information, please call (502) 584-FEST or visit KDF.org.

Mike Tirico joined NBC Sports Group in July 2016 working on events including the Olympics, NFL, horse racing, golf, Notre Dame Football, and other big events. In February 2017, Tirico was named NBC’s primetime Olympic host, with his first broadcast in this role to come at the 2018 PyeongChang Olympics. In the spring of 2017, Tirico debuted as the host of NBC’s Triple Crown horse racing – covering the Kentucky Derby, Preakness Stakes, and Belmont Stakes. Tirico made his NBC Sports Group debut in July 2016 as host of NBC Sports’ live coverage of The Open from Royal Troon in Scotland. Shortly thereafter, he made his Olympics debut as host for NBC’s daytime coverage of Rio 2016. Also, last fall, Tirico served as host of The Ryder Cup and NBC’s primetime coverage of the Breeders’ Cup World Championships. Tirico joined NBC after 25 years at ESPN/ABC, where he established himself as a preeminent broadcaster on properties and events including Monday Night Football, The Open, The Masters, NBA, college football, college basketball, FIFA World Cup, and tennis’ U.S. Open and Wimbledon. In addition, he has hosted SportsCenter coverage of the U.S. Open, The Masters and the Daytona 500, and anchored coverage of the Super Bowl, NCAA Final Four, and NFL Draft for both television and radio