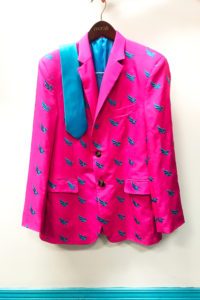 It’s become a signature of the Derby Festival and a sign of spring in Louisville – the Festival’s official uniform jacket. In chameleon like form, the design of the jacket has changed through the years after first being introduced in 1973. Festival fans will see the newest rendition this spring, after it was officially unveiled tonight on the runway at the Festival’s annual Spring Fashion show. The jackets still feature the Festival’s Pegasus icon, while the former color scheme of khaki and black has been updated to a fuchsia and Caribbean blue.

“This time we’re returning to a bolder spring color palette and it’s sure to brighten your day,” said Mike Berry, Kentucky Derby Festival President and CEO. “It’s definitely one that will stand out, but still remains steeped in tradition.”

The Festival solicited the help of stylist André Wilson of Louisville-based Style Icon to design the new jackets. Meetings with the Festival started last fall, which lead to pencil sketches, choosing the colors and then creating a digital artist rendering. Wilson’s goal was to make it different, but stay within the brand, as well as have a versatile and iconic piece.

“I don’t like fashion that can’t be worn with everything else,” said Wilson. “I wanted to pick a color that would go with different colors and it had to stand out. Bright colors always work at Derby time.”

The jackets were manufactured and tailored in New York and St. Matthews. Derby Festival staff and board members wear jackets of the same style and color; current and past Festival chairs are distinguished by wearing jackets in a different design.

The Derby Festival’s official jackets made their debut in 1973. They were burgundy in color in their first incarnation, with pocket crests attached by military clasps. In 1976, a new jacket was unveiled: it was navy in color with gold Pegasus icons. A dozen years later the color scheme was again changed, this time to a teal color with pink Pegasus icons, and then again in 2006 to khaki and black colors.