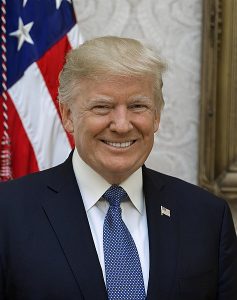 President Donald Trump visited Louisville yesterday to speak at the American Veterans 75th National Convention. At the end of his speech, the President signed a presidential memorandum that will cancel student loan debt for approximately 25,000 disabled veterans. He was joined on stage with Governor Bevin, Sergeant Katherine Castle, Sergeant Nick Stefanovic, Deputy Secretary Byrne, and Secretary of Education Betsy DeVos.

During his speech, President Trump touted the improvements that have been noticeable at the VA since he took office. The wait times have decreased by more than 33% and that patients’ trust in the VA has increased by nearly 100%.  He also went on to say, “We’ve secured a record $8.6 billion for mental health services”, which includes a White House VA Hotline and same-day emergency mental care.

President Trump also talked about other improvements to veterans lives, such as finding permanent housing for over 30,000 veterans over the past two years and stating: “Veterans unemployment has reached the lowest level ever recorded.” The GI Bill has also been expanded to allow veterans to use their benefits to get a higher education at any point in their lives.

President Trump also mentioned the opioid crisis and the effect it has had on veterans over the years. Recognizing that many of the veterans affected are in pain, he wants scientists to find  a pain killer than is non-addictive: “Get a pain killer that, when you break your arm and you go to the hospital, you don’t come out of the hospital addicted to opioids.”

His entire speech can be read here.