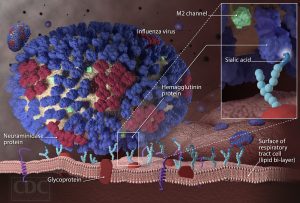 Louisville has had two more flu deaths in elderly individuals with underlying medical conditions. One of the individuals was unvaccinated and the other’s vaccination status is unknown.

These deaths come a month after another unvaccinated elderly individual with underlying medical conditions died of the flu. Patient privacy laws do not allow for disclosure of other details about the individuals.

Louisville had 880 laboratory confirmed flu cases last week, and 886 in the prior week. This compares to 570 and 565 laboratory confirmed flu cases respectively for the same two-week period last year.  Kentucky’s Department for Public Health is reporting widespread flu activity.  Nationally, the Centers for Disease Control and Prevention (CDC) reports that flu activity is high, continues to increase and has been elevated for eight weeks.  CDC estimates that so far this season there have been at least 6.4 million flu illnesses, 55,000 hospitalizations and 2,900 deaths from flu.

“It’s not too late to get vaccinated. Flu vaccination is always the best way to prevent flu and its potentially serious complications,” said Dr. Sarah Moyer, director of the Louisville Metro Department of Public Health and Wellness and the city’s chief health strategist.  “If you’re sick, please see a healthcare provider right away. Antiviral medications may be a treatment option that can lessen your symptoms and shorten the time you are sick.”

The CDC estimates that influenza has resulted in between 12,000 and 61,000 deaths each year in the United States since 2010.  During that period there have been from 9 million to 45 million flu-related illnesses and between 140,000 to 810,000 hospitalizations.

People  who are at high risk of serious complications from flu include:

“We recommend anyone six months and older get a flu shot,” Moyer said. “But we especially recommend it for people in these high-risk groups.”

Flu shots are available at physicians’ offices, pharmacies and at many grocery stores. The cost of flu shots is covered by most insurance plans, by Medicare and by Medicaid.