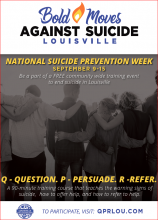 Louisville Mayor Greg Fischer, community leaders from the Louisville Health Advisory Board, including a young woman who lost a loved one to suicide, today urged residents to help prevent suicide by participating in a free community-wide training event.

They also established the ambitious goal of setting a Guinness world record for training the most people in a suicide prevention technique called “QPR” – Question, Persuade, Refer – during this year’s National Suicide Prevention Week, which is Sept. 9-15.

QPR is a free 90-minute training designed for anyone 18 years or older.  No specialized mental health care training or expertise is required. Certified trainers will discuss myths about suicide, identify warning signs, outline how to talk with someone who may be thinking about suicide and how to persuade them to seek help.

Similar to CPR, QPR is designed to support an emergency response to someone in crisis, and to save lives.

Free trainings will be conducted at various times and locations throughout Louisville during National Suicide Prevention Week.  Sign up at www.qprlou.com

“There is perhaps no greater individual tragedy than someone deliberately ending their own life,” said Mayor Fischer. “Unfortunately, Louisville has a higher rate of suicide compared to similar-sized cities. One suicide is too many.  As a compassionate city, we must act. I encourage everyone to participate in this training.  My team and I will.  I hope you will too.”

While homicide garners much media attention both locally and nationally, suicide is more pervasive.  According to the 2017 Health Equity Report there were 584 suicide deaths in Jefferson County from 2011-2015 compared to 333 homicides for the same period.  According to recently published data from the Centers for Disease Control and Prevention (CDC), suicide rates are on the increase, and more than half of people who die by suicide do not have a known mental health condition.

“The rate of suicide death in Louisville is far too high,” said Dr. Val Slayton, Regional VP for Health Services, Humana.  “That’s why one of the top goals of the Louisville Health Advisory Board is to make Louisville a Zero Suicide city.  Each of us encounters friends and family members struggling with depression and entertaining thoughts of ending their lives.  QPR training equips people to recognize warning signs of suicide, how to offer hope, and how to refer to resources to help to save a life. Early recognition of suicide warning signs can be key to saving a life”

“While suicide has received attention in the press recently because of the death of celebrities such as Anthony Bourdain and Kate Spade, we recognize that many people are uncomfortable discussing the subject, even when family or friends may be in crisis,” said Dr. David Hanna, Behavioral Health Program Manager, Passport Health Plan. “QPR training can give people the skills to make a life and death difference.”

Michelle Jones, co-founder and director of the Pete Foundation, said, “My brother Pete seemed to have everything going for him as he pursued a graduate degree in engineering.  Yet he suffered from a depression that ultimately claimed his life.  Today countless people are fighting depression and may be contemplating suicide.  We need to equip ordinary people with the tools to recognize the signs that can lead to suicide and the skills to intervene.  I urge everyone to take the QPR training.”

To learn more or sign up for a training, visit qprlou.com.