Family Kite Festival To Be Held At Riverside, The Farnsley-Moremen Landing 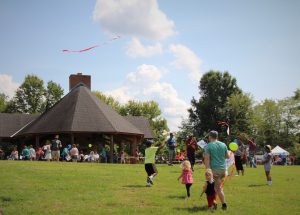 The second-annual “Family Kite Festival” will take place on the grounds of the historic home and farm, located in southwest Louisville at 7410 Moorman Road. Admission to the Kite Festival is free, although concessions will be offered for sale. The first 300 children in attendance at the festival will receive a free kite. Activities include performances from the Chicago Kite Team and Pigs Aloft Stationary Kites; stilt walkers; bubble making, kite making, jugglers, children’s games and complimentary tours (donations accepted) of the Farnsley-Moremen House. The LMPD display helicopter will also be at the festival for kids to enjoy.

“The Family Kite Festival is quickly becoming a tradition in its second year at Riverside, one of the true gems in beautiful southwest Louisville. Last year, several hundred children attended and we’re hoping to see more smiling faces on the banks of the Ohio once again this year,” said Mayor Greg Fischer.

“This is a unique event for Louisville and we hope it becomes a popular tradition for years to come,” said Seve Ghose, Director of Parks and Recreation. “It should be a lot of fun for the entire family, whether you’re an experienced kite maker or just interested in trying out something new.”

“I’m excited to have the kite festival back for a second year at the lovely Riverside, the Farnsley-Moreman Landing. This will be a great event for young and old alike. Please plan on attending this free event on September 16,” said Councilwoman Cindi Fowler, who represents District 14 in southwest Louisville.